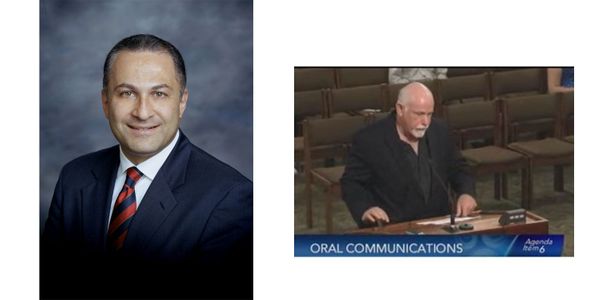 I sent this email to Mike Mohill in response to the irresponsible statements made in his email blast. Wanted to publish it in its entirety in case he decided not to publish it or edit it to his liking.

I wanted to respond to your op-ed on my history and correct some of the statements made on my behalf.

I ran for reelection and lost in 2007, In 2009 I ran for the office of City Treasurer after the then Treasurer told me that he was not running for reelection, his actual words were (I’m getting the hell out of here). Later he changed his mind and decided to run (rumors were that he was coerced to run because some people did not trust an Armenian as Treasurer) and made it a two-person race. I lost that election by around 400 votes.

Mr. Manoukian gave up his "low" paying City Councilman position and ran unopposed for the City Treasurer's job and won. With the strong support of the Armenian American community,

In 2013 I ran for the office of City Treasurer for the City of Glendale, but it was not unopposed. As you stated then Councilmember Weaver and former Treasurer Borucki hatched a plan to undermine my campaign for the City Treasurer by introducing Measure A, which would have changed the charter to have an appointed City Treasurer, therefore curtailing the vote of the people. Meaning even if I had won the election and the voters approved my candidacy, Measure A would have given the Council the option of appointing another as Treasurer. Another question for you Mike is why do you always emphasize “strong support of the Armenian American community”? why not “strong support from the community”. Are you implying the I was elected because I am an Armenian American and not because of my qualifications?

In 2018, City Treasurer RAfi Manoukian was the treasurer for the YES on Measure S campaign, 3/4% sales tax increase. With a projected minimum of $30 million annual increase in sales tax revenue to help pay for the outrageous salaries and retirement pension benefits

As to endorsing Measure S – As much as I am against additional taxes, I strongly believe that taxes generated locally should stay in our City. The $30 million was not the projected minimum but the projected maximum. As actual revenues currently indicate the amount is closer to $20 million. None of those funds have gone to pay salaries and retirement, Watch the council budget meetings.

“Today, City Treasurer Rafi Manoukian often is not at his desk and can be seen about town campaigning for his next re-election. It is said Mr. Manukian's staff runs his department while he is AWOL.”

In the Eight years that I have served as City Treasurer, I have not missed one day of work, and any days that I have not been in the office was either sick or vacation. Your statement that I run my department while AWOL is frankly insulting since you have not talked to my staff or any other staff that I work with to confirm your statement. For the RECORD, I am usually at my desk before 7am in the morning and leave after eight hours of work around 3pm, and I have my lunches for 10 to 15 minutes usually at my desk.  Since I’ve been in office I have implemented a paperless policy for the office by sharing electronic documents and using technology to store and share documents. I have updated the technology to track and record City’s investments by transitioning to a robust web based software resulting in enhanced reporting and instant access to the portfolio for all of the staff. Successfully initiated and recommended changes to the City’s investment policy to the City Council resulting in greater opportunities for high grade investments for the City. Increased the quality of the investment in the City’s portfolio as well as increasing the overall return on our investments. Since I have been in office the portfolio has grown from $373 million to around $800 million and The portfolio has earned in excess of $17 million just last fiscal year. We publish our portfolio on the City’s website on a monthly basis and give a report to the council and community annually. My last report was on September 22, 2020. The portfolio and investments are only around 10% of my work. As a CPA, I provide direction and management for the work that is being done in my office, and I have to say that I have one of the best team of coworkers anyone can ask for. My office handles all the banking relationships for the City of Glendale. We Process over $7 million in cash transaction, 35000 checks annually, reconcile over 5000 transactions monthly, stopped over $60,000 in fraudulent activities over the last three years. The last two years we have been subject to Payment Card Industry Certification, and I have been intimately involved in drafting and implementing policies and procedures to meet the industry guidelines. Just to name a few of my responsibilities as Treasurer.

As to your statement “can be seen about town campaigning for his next re-election” The comments I get from my acquaintances is that I’m not around and I don’t attend events which is true, and with the pandemic since March, I can say with confidence that I have not been seen about town campaigning for my next re-election. But in case you are interested, I am running for reelection in March of 2022, but it’s too soon for that. At this time, now that I am 60 years old, I am just trying to survive this pandemic.

“To save money, Glendale City Council should think about modifying the City Charter to change the City Treasurer's position from being elected to beingappointed by Council, with input from the community.”

This is an odd statement that you make, how would you save money by changing the City Treasurer from an elected to an appointed by Council position, when you would still have to pay the same salary to an appointed or an elected treasurer. Or maybe you think you can hire a City Treasurer by paying them less than their peers, experience and value. As to your statement “with input from the community”, I don’t understand isn’t voting for the City Treasurer input from the community?

As to my bankruptcy, which a council candidate circulated an unscrupulous flyer during the 2007 election cycle, that was printed on plain piece of paper without stating the funding source for the flyer and without taking credit for it. Basically a cheap shot. I have had one Bankruptcy in my lifetime not two. Back in 1992 I was laid off during that recession, and I was a CPA, was not able to find a job, had a child in 1993 and after considerable deliberation with my family decided to file for bankruptcy in 1994 to protect my family and my home. I would think that considering what our generation has been through with the great recession of 2007-08 and the pandemic we are facing today, this would not be an issue.

As to comments made regarding the former City Manager Scott Ochoa. I was one of five councilmembers who voted for his appointment. After extensive interviews with a number of candidates the Council voted unanimously to hire Mr. Scott Ochoa as City Manager. I believe he was an exceptional manager. Some people did not appreciate his management style, however he was able to reduce the City’s workforce from around 2000 employees to around 1500 employees therefore saving the city in excess of $15 million annually, which over the last eight years amounts to an amount in excess of $120 million, and he was successful in decoupling the City’s Other Post Employment Benefits (OPEB) reducing the City’s liability by over $200 million. Like I said you can disagree with his style but cannot disagree with the numbers and results.

Please publish this statement in its entirety without editing, I will publish it on my website http://www.myglendale.com  and send out a notification with a link to the article.